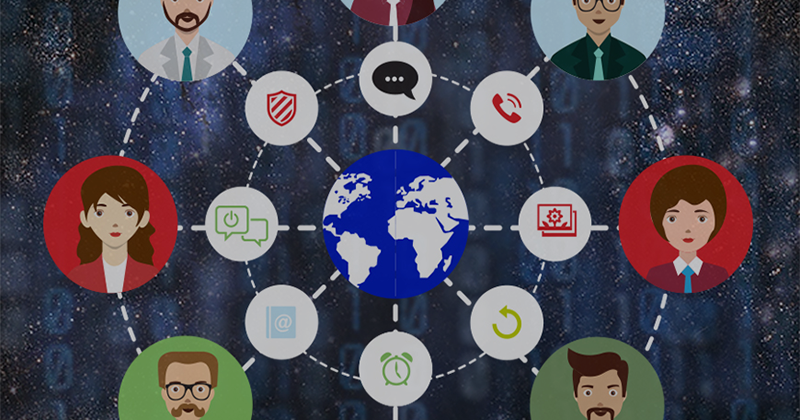 How The Internet Works – Episode 9.

How the Internet works – Episode 9.

How The Internet Came To Be

We’re almost at the end of our How the Internet works series. And what would a series about the Internet be without exploring how it was invented?

The Internet is probably the most significant invention of our era. This post explores the very basic needs and historical technological milestones that gave rise to the Internet.

The Greatest Invention of Modern Man Was A Collaborative Effort

Much like the Big Bang (which was not a bang at all), the Internet evolved into being.

Man had been postulating the idea of the Internet for decades before it materialised. The idea of a worldwide communication system dates as far back as the early 1900s. However, these were speculative notions and the technology needed to build the Internet had not been built yet.

It took the work of a few good men bounding their specialised skills together to make the Internet a reality.

The Internet really started taking shape when the United States Department of Defence funded a research project to design a communications network which would allow researchers to share computer resources from remote locations.

However, it must be noted that although the US government was a catalyst for the Internet, they were not the only people attempting to create a global network of computers. History shows that, at roughly the same time, universal consciousness had several scientists, programmers and engineers working independently yet simultaneously on the same fundamental idea.

Problems and Solutions: the needs that gave rise to the Internet

Why is it that the US Department of Defence funded the development of Internet? Contrary to what you may think -or may have read- the need to build an electronic communications network was not specifically for military purposes.

The Defence Department’s Advanced Research Projects Agency, DARPA (then known as ARPA), was funding research at several universities that were working on, amongst other things, advanced computer science and artificial intelligence.

To stay ahead of the curve and produce next-generation research, these institutions argued that they needed the most up-to-date and sophisticated computers of the time. But to purchase a new computer for each institution year on year proved far too costly.

It was thanks to the revolutionary thinking of and persuasion of J.C.R. Licklider that ARPA agreed to back the idea for a system that would allow these institutions to share computing capability and software.

Of course, there was also an understanding that if the project were a success, the same technology would propel command and control capability within the US military. So work on The Advanced Research Projects Agency Network (ARPANET) began.

The minds that “made it work.”

By the time ARPANET’s construction commenced, some of the technology which would enable it had already been theorised or even prototyped by other independent scientists. ARPANET is really where these concepts and designs came together to create a working model of the Internet we know today.

The director of ARPA’s Information Processing Techniques Office (IPTO), Bob Taylor got the ball rolling. He hired Lawrence Roberts to head the project and build on Licklider’s proposal. Roberts is credited as the main architect of ARPANET alongside Thomas Marill by creating the first Wide Area Network (WAN).

However, creating a system computers interconnect over large distances was one thing. They also needed ensure that these linked computers communicated as efficiently as possible. The general standard for computer communication at the time was circuit switching, which meant that computers shared information over a dedicated connection to one another. This left the system vulnerable to attack. If a line went down or destroyed for any reason, communications would come to a grinding halt.

Paul Baran solved the problem. He was the first to devise the concept of a distributed network and, with that, produced a series of papers which described the architecture for a distributed communications as well as packet-switched communications. Allowing information to be rerouted in the event of a failure.

Meanwhile, Donald Davis, who was working for United Kingdom’s National Physical Laboratory (NPL) independently developed the concept of packet switching and proposed a national data sharing network. Although the UK did not adopt the concept nationally, he continued his work by heading up the team which formed the design and proved the feasibility of packet-switched networking. Lawrence incorporated Davis’ work into ARPANET’s design with Baran’s input.

Bob Khan and Vint Cerf Dubbed the Fathers of the Internet

Interoperability was next big challenge facing the engineers at ARPA . The computers used different programmes and operating systems (or at least different versions of each) which was counter-productive to the realisation of true collaboration.

Remember that the derivative was not only to connect computers but to enable all communications devices to “include packet satellite networks, ground-based packet radio networks and other networks”¹ so that communication would be possible to navel fleets, aircraft and military vehicles as well.

This is where we pay homage to Vinton G. “Vint” Cerf and Robert E. “Bob” Kahn. Cerf and Kahn co-created Transmission Control Protocol/Internet Protocol (TCP/IP) which is the fundamental protocol that makes the Internet functional.

TCP/IP made it possible for information to be transmitted over any medium to any device. It was also designed specifically to accommodate any new technology added to the network in future and allow the Internet to scale. These protocols paved the way for all subsequent Internet-based developments such as the World Wide Web. On that note, we have Tim Berners-Lee to thank for HyperText Markup Language (HTML) and the Web.

Cerf was also instrumental in making the Internet available to the public. He approached the Federal Networking Council for permission to connect the first commercial email service to what was still a federal network. This was a great leap as back then there was a rule prohibiting commercial traffic on the federal government’s backbone. However, after the piloting this idea for a year, slowly other commercial email service providers were granted the same access. In no time, isolated email systems were able to send traffic to one another.

Gradual shifts like this continued until APRANET was eventually decommissioned in 1990 and by 1995 the Internet was fully commercialised.

Where to from here?

The Internet continues to develop. New applications and devices are introduced daily. Companies worldwide are stretching their imaginations developing ways to make their products or services integrated with the Internet. We are busy transitioning to IPv6 as we have already started running out of IP Addresses! And Google is even working on plans to rain LTE from the sky.

If you’re looking for a future-proof Internet Connection, look no further than BitCo Fibre. Find out more