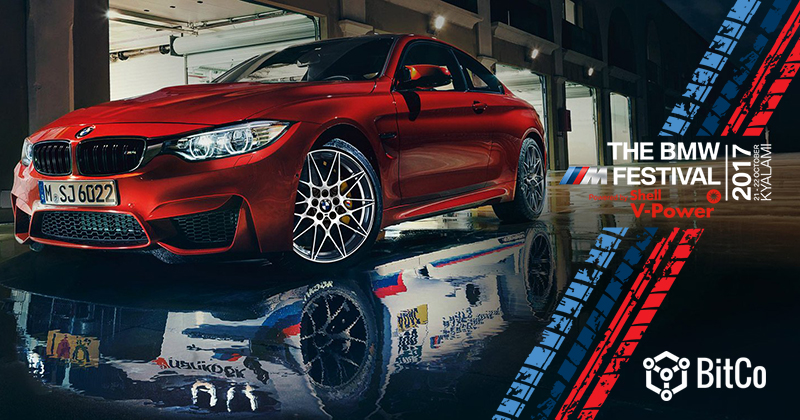 BMW South Africa to host the first-ever BMW M Festival at the Kyalami Grand Prix Circuit from 21 to 22 October 2017.

Johannesburg, October 2017 – BitCo, a National Tier One Internet and Telephony Provider renowned for their Business Fibre Internet, Wireless Connectivity and Voice services throughout South Africa, is a proud partner of the BMW M Festival.

Midrand – BMW South Africa will host the first-ever BMW M Festival from 21 to 22 October 2017 at the Kyalami Grand Prix Circuit in Johannesburg. At the festival, BMW customers, fans and car enthusiasts will get a sneak preview of current as well as upcoming BMW M models, experience hot laps and book test drives across the BMW M and M Performance model range.

“South Africa has been one of the top performers in the world in terms of BMW M market share and sales. For example, since 2015 BMW South Africa has been ranked fifth in the world in terms of overall BMW M market share and managed to rise up to third place this year. It is therefore very clear that South Africans are big fans of our BMW M vehicles and – as seen at the international BMW M Festival held annually at the 24-hour race at the Nürburgring – we would like to use the BMW M Festival as an opportunity to inspire our customers and fans with innovative experiential platforms,” says Alexander Baraka, General Manager: Brand Management BMW, Marketing Services at BMW Group South Africa.

Festival goers will also get the opportunity to participate in drag races, drifting, walk through one of the largest BMW showrooms with attractive finance offers to choose from, book test drives, enjoy live music by some of South Africa’s top DJs and artists, gourmet food and drinks, a children’s play area and more.

The BMW DTM race team (Team Schnitzer with driver Tom Blomqvist) will also make a special appearance at the event and offer visitors hot laps in the BMW M4 DTM car around the 16-turn, 4.522km anti-clockwise FIA graded circuit. With four titles in three years, the BMW M4 DTM is synonymous with great success in the most competitive touring car series in the world. Marco Wittmann won the Drivers’ title with this car in both 2014 and 2016. BMW Team RMG also picked up the Teams’ title in 2014, while BMW won the Manufacturers’ Championship in 2015. This year the new BMW M4 DTM made its debut. The car has been given a complete workover and undergone significant development in accordance with DTM regulations (more information available on the BMW Motorsport website: https://goo.gl/HKcJ5p).

The Gauteng BMW Car Club Concours Event – the most prestigious event on the BMW Car Club calendar – will also take place at the BMW M Festival. This event has been ongoing for over 32 years and is the greatest annual South African celebration of BMW heritage. Entrant’s vehicles are prepared meticulously for up to four months prior to the event and then expertly judged on their condition, authenticity, preparation and presentation.

Shell South Africa has also partnered with BMW South Africa as the title sponsor of the BMW M Festival. “We’re proud to call BMW M our global partner and to team-up with them to host the exciting and first-ever BMW M Festival powered by Shell V-Power in South Africa. The BMW M Festival is a further testimony as well as an opportunity for our customers to experience and celebrate our shared passion for innovation and performance, which are the driving force behind our partnership. It is for this reason that BMW M recommends Shell V-Power, our performance fuels,” says Frans Maluleke, Cluster Fuels and Brand Manager for Shell South Africa.

Don’t miss out on the fun with BitCo!

Speed is BitCo’s game and will have a formula one simulator on the stand where visitors can test their skills and fight for the fastest time on International F1 race tracks. It will be a Top Gear style competition where great prizes will be up for grabs.