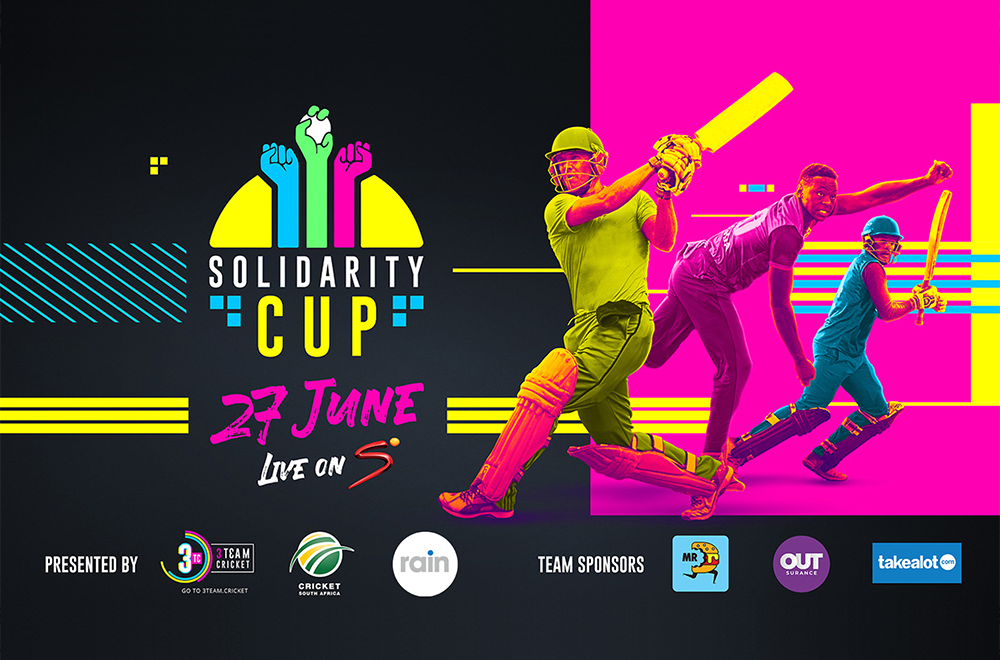 3TeamCricket, in partnership with Cricket South Africa is set to launch a brand-new format of cricket.

Cricket fans can celebrate the return of their favourite game with the innovative and first of its kind 3TCricket, where three teams will play in a single match, competing for the inaugural Solidarity Cup on 27 June at SuperSport Park.

Presented by RAIN, the Solidarity Cup will be the showcase event for the brand-new cricket format which sees 24 of South Africa’s top cricketers in three teams, playing two halves in one match.

SuperSport is the official broadcast partner of the Solidarity Cup. The match will be the first live sport in South Africa since the lockdown was announced in March 2020. It will be broadcast on SuperSport 2.

CSA Director of Cricket, Graeme Smith, believes that this new format will bring back the excitement of cricket. “It’s been quite some time since the South African public and fans of cricket worldwide have been able to consume the game we all love. I know that the players are itching to get back into action as well, which is why we as CSA are so excited about the Solidarity Cup. It’s a thrilling new format and a match that is working towards a greater good. We are proud to partner with 3TeamCricket on this project.”

RAIN Chief Marketing Officer, Khaya Dlanga, believes that 3TCricket will be an exciting new addition to the international calendar.
“As a pioneer in the data-only mobile industry, we have an avid appreciation for innovation. At RAIN we are ecstatic that some of the best players in South Africa will kickstart 3TCricket, which we are sure will be an inextricable part of the international cricket calendar in no time,” said Dlanga.

Takealot Eagles skipper AB de Villiers believes that 3TCricket will be an incredible spectacle for the fans starved of cricket action.
“It’s a great idea and credit must go to Cricket South Africa and Rain for working to develop this new and innovative style of cricket. There are very few team sports in the world where you get to play more than one opponent in a single fixture, this is going to be a game changer. We have some very talented cricketers involved who are really excited to return to play with a bang.”

Mr D Food Kites captain, Quinton de Kock relayed his excitement at the prospect of beating two teams at once in the 3TCricket model.

“I’m really excited to be captaining the Kites, we have a great team and I think we can claim the gold. I’m even more excited about the new format, it’s going to be a lot of fun playing to beat KG and AB on the same day”, De Kock said.

Proteas fast bowler, Kagiso Rabada, the captain of the OUTsurance-sponsored Kingfishers, will make his much-anticipated return to cricket in the Solidarity Cup after being ruled out with a groin injury since late February 2020.

“It’s been a long wait to get back into action and I’m looking forward to playing again alongside some of the country’s biggest names. We have a good balance of talent and experience in our team and I’m confident that we can walk away with the inaugural Solidarity Cup.”