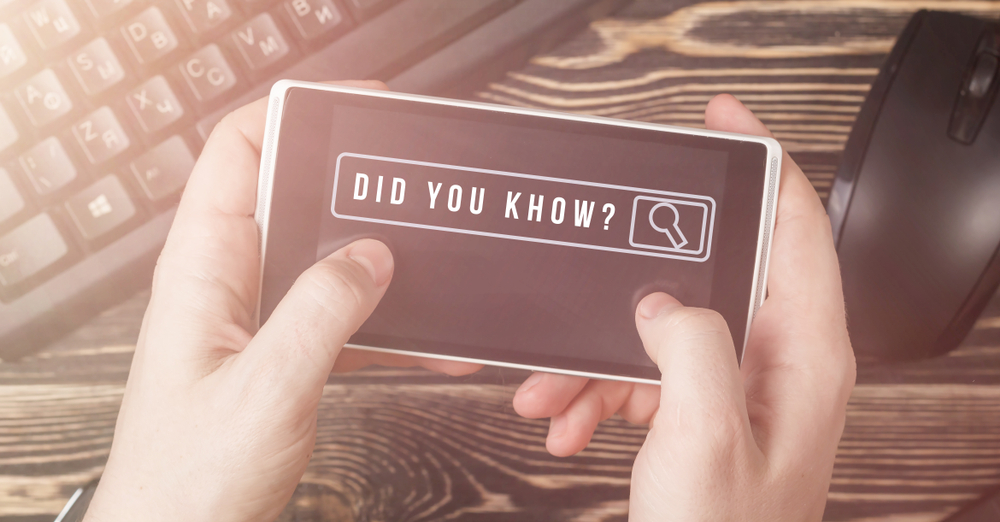 Life without the Internet is nearly unimaginable. We use the Internet for activities such as harvesting information, connecting and engaging with friends and strangers alike, buying products from distant places, and entertaining ourselves for hours on end.  Here, we present 10 awesome Internet facts that you may find fascinating.

In 2019, the mid-year estimated population in South Africa was 58,78 million of whom 31.18 million are active Internet users with 28.99 million users accessing the Internet through mobile devices (Stats SA & Statista, 2019). South Africans spend an average of 8 hours and 32 minutes on the Internet per day via any device (We Are Social, 2018). An Effective Measure report shows that South Africans with access to broadband spend more time on the Internet than watching TV, listening to the radio, or reading newspapers. As of March 2019, gumtree.co.za was ranked first with over 109 million page views and news24.com second with 58.82 page views (Statista 2019).

4.3 billion out of 7.7 billion people are already online

As at 23:23 on Wednesday 13 November, there was an estimated 7. 713 billion people on the planet (Poodwaddle World Clock). Approximately more than 4.33 billion people were active Internet users as of July 2019, encompassing 56 percent of the global population (Statista 2019).

With 632 million Internet users and 200 million between the ages of 15 and 35, China was the first country to label online addiction a disorder in 2008. 24 million children are thought to be addicted to the Internet and some addicts are treated in China’s treatment or boot camps (The Gaurdian.com). Labelled ‘electronic heroin’, Tao Ran, director of the country’s first Internet addiction treatment clinic in a military hospital in Beijing says: “Internet addiction leads to problems in the brain similar to those derived from heroin consumption. But, generally, it is even more damaging. It destroys relationships and deteriorates the body without the person knowing” (Telegraph.co.uk).

How many websites are hacked on a daily basis?

“Cybercrime is the greatest threat to every company in the world.” (IBM’s chairman, president and CEO). A Clark School study at the University of Maryland is one of the first to quantify the near-constant rate of hacker attacks of computers with Internet access. The study found that on average, hackers attack sites every 39 seconds (securitymagazine.com). Highly effective computer software programs are used by cybercriminals to automatically detect vulnerable websites which can be hacked easily.

The majority of Internet traffic is not generated by humans

According to a study conducted by Incapsula, a web security service, humans only account for 38.5 percent of all website traffic on the Internet. 61.5 percent, or nearly two-thirds, of all web visits are made by Internet bots, a name given to a wide range of software applications that crawl and interact with the web on behalf of their human owner. Incapsula states that 30.5 percent of non-human web traffic are “bad bots”, a nefarious group responsible for everything from posting spam comments and links, to stealing data and distributing malware.

How many emails are sent on a daily basis?

Almost half of the world’s population are Internet users and a massive 2.7 billion of them are using Facebook. Facebook remains the undefeated social media champion, reaching 60.6 percent of Internet users. It has the most active users out of all the social media platforms, and people spend on average 35 minutes a day on Facebook scrolling through their feeds.

The first website created was info.cern.ch, and it is still online. It’s a basic HTML site, and the page contains a few lines of text. The page was written with the help of the first version of HTML.

How many hours of videos are uploaded on a daily basis?

400 Hours of video content is uploaded to YouTube every minute. The average Internet user spends 4 hours every month on YouTube which serves more than 1 Billion people every month. ‘Gangnam Style’ by PSY is still the most viewed video of all time with more than 2,840,000,000 views.

‘The bot arms race is very real; bot defenders and bot operators are playing a recurrent game of cat and mouse’ (Distil Networks). Bots or web robots mimic real human workflows across web applications to ‘behave’ like real users to generate fake Internet traffic. Distil Networks published its 2019 Bad Bot Report and highlights that bots accounted for 37.9 percent of all online traffic during 2018. This represents a welcome decrease from 2017. The share of human traffic grew by 7.5 percent to 62.1 percent.